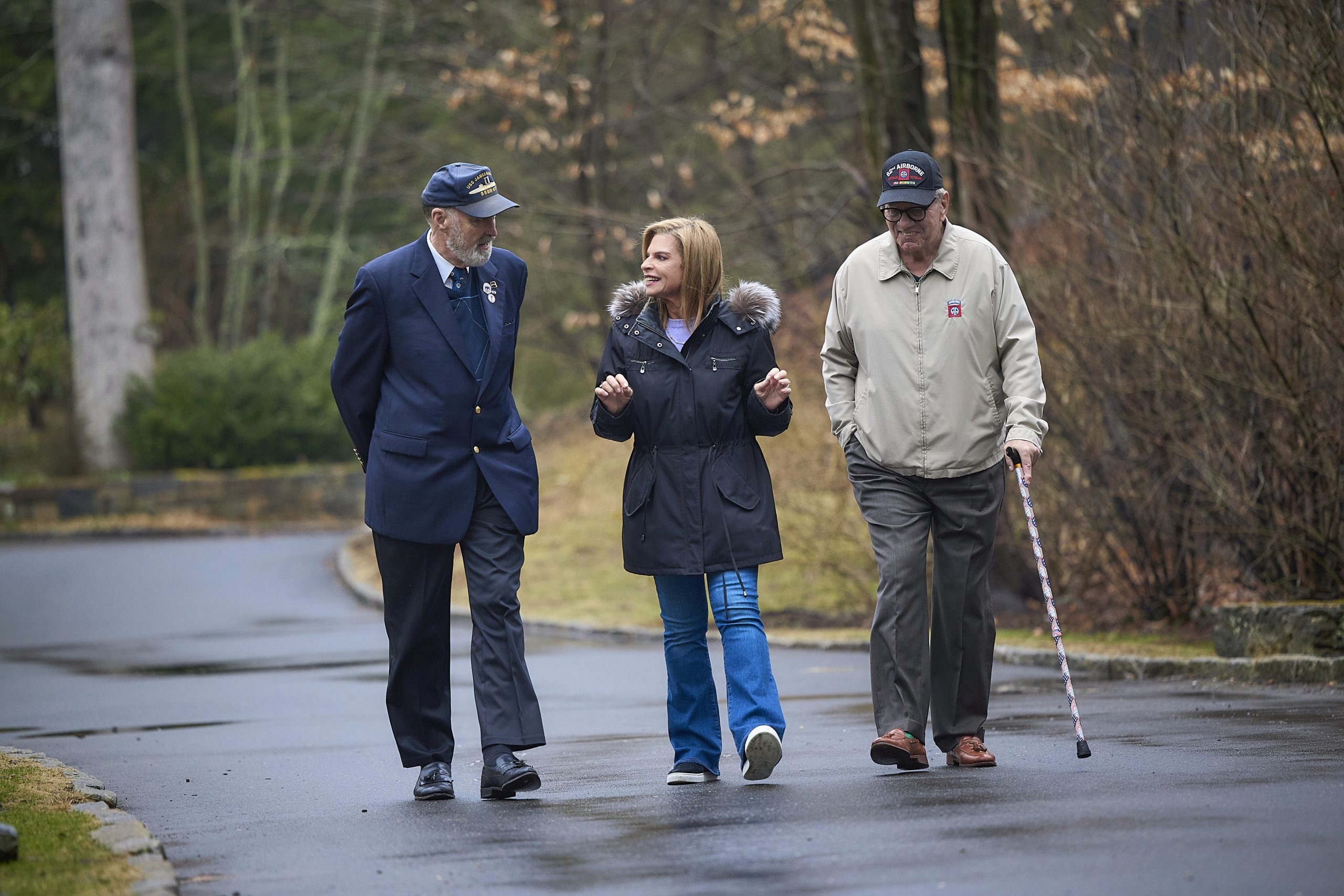 Twenty-two years ago this week, my husband, Steve, and I traveled to Normandy to see the beaches: Omaha, Utah, Gold, Juno, and Sword.  It was a cold drizzling day in June 1990, eerily like that day in June 1944.  We began at the Museum in Caen, walked on Omaha Beach, saw the Nazi pillboxes above then actually entered one to see the landing beach below. While visiting the Museum commemorating and explaining the artificial harbor built by the British off Arromanches over Gold Beach (an amazing engineering accomplishment), we toured the exhibit at the same time as a group of German soldiers in uniform and speaking German, adding to the impact.  We ended the day at the sacred American Cemetery in Colville-sur-Mer, walking through the portico there as the sun began to set but was still lighting the crosses and stars of David on the rows of so many graves.  The flag was being lowered and taps was playing.  It was one of the most moving experiences of my life.

Three years ago, on the 75th anniversary of D-Day President Trump said of those courageous men who stormed those beaches to defeat the Nazis and save the world from totalitarian domination:

“You are among the very greatest Americans who will ever live.  You’re the pride of our nation.  You are the glory of our republic.  And we thank you from the very bottom of our hearts.”  The “…mission is the story of an epic battle and the ferocious struggle between good and evil.”

These young Americans were joined by “…the British, whose nobility and fortitude saw them through the worst of Dunkirk and the London blitz…the Canadians, whose robust sense of honor and loyalty compelled them to take up arms alongside Britain from the very, very beginning…the fighting Poles, the tough Norwegians and intrepid Aussies…the gallant French commandos…and brave country men ready to write a new chapter in the long history of French valor,” all fought fiercely to liberate Europe from Nazi tyranny and genocide.

As the men poured onto the beaches “They carried on their shoulders not just a pack of a soldier but the fate of the world.”

Today, we are enjoying a summer of festivals and vacations because that greatest generation saved the world, making sure that we, their children and grandchildren, would live in freedom.  Yet today we are being challenged to fight to preserve America against the far-left policies that undermine our freedom, our economic security and our physical security.  As did the Greatest Generation in the 1940’s, today it is our turn, our obligation to them and to future generations of Americans to fight to make sure that they too will live in freedom, opportunity and prosperity.

As President John F. Kennedy said to Congress in May 1961, “These are extraordinary times. And we face an extraordinary challenge. Our strength as well as our convictions have imposed upon this nation the role of leader in freedom’s cause.  No role in history could be more difficult or more important. We stand for freedom.”

Today we remember and pay heed to the words of President Ronald Reagan, who died on June 5, 2004, 18 years ago yesterday and who reminded us: “Freedom is never more than one generation away from extinction.  We didn’t pass it to our children in the bloodstream.  It must be fought for, protected and handed on to them to do the same or one day we will spend our sunset years telling our children and our children’s children what it was once like in the United States where men were free.”

Today and always, I salute and thank all our veterans, especially those who fought in World War II and the active-duty members of our military, wherever they might be serving.

I am Leora Levy. I am running to be your next US Senator to protect our freedom and our rights, including the right to control our own destiny.  My mother and grandparents escaped Lithuania and the Nazis in 1940.  In 1960, we escaped Castro and communist Cuba.  I know what it means to lose your country to totalitarian tyranny.  I wake up every morning thanking God that I am an American woman, a free and independent American Citizen.  I am a principled conservative, pro-life, pro-2nd Amendment, a fiscal conservative who supports cutting spending, eliminating waste, lowering taxes and deregulation in support of small businesses and hardworking American families.